Vernon Kruger, a 52-year-old man from Dullstroom, a small town in South Africa, hasn’t set foot on the ground in 73 days, ever since he climbed into his “home in the sky”, a small barrel at the top of a 25-meter-tall pole.

The first time Kruger climbed into his now famous barrel was 22 years ago, as a dare. He was on a an exotic island, during a vacation, when one of his friends said ‘why don’t you break the record for sitting in a tree?’. It was a joke  at first, than it became a dare, so Vernon started looking into it. He learned that an Indonesian man had already broken the record by sitting in a tree for 28 days, but instead of letting it go, his friends suggested he try pole sitting instead. The record stood at 54 days at the time, so the South African set up his own pole and stood on it for 64 days. That was in 1997, and since no one managed to break his world record since, he decided to do it himself. 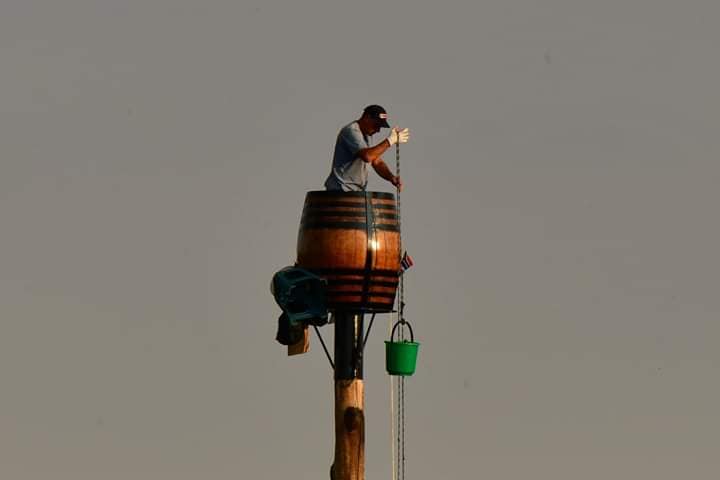 “Well, I don’t know why anymore, I’m starting to question myself,” Kruger answered when asked why he took up the record breaking attempt again. The previous time I did it was a dare and that was 22 years ago, nobody has managed to beat my record. A similar attempt was made by David Blane, the magician, and they all failed, so I was approached to see whether I’d raise the bar a bit.”

It may sound like a very wacky challenge, but living in a small barrel at the top of an eight-storey-tall poll is no joke. There is very little space, not much to do, and you’re reliant on people on the ground for things like food an water. Still, Kruger has been able to stay there for a whopping 73 days, and he doesn’t plan on coming back until he reaches 78 days, at least.

“It does get a bit frustrating up here especially because I can’t do many things for myself, I need to rely on other people for absolutely everything,” the 52-year-old said. “Sleeping in this barrel is not very easy, it’s a very small place to curl up in and I have to lie in a foetal position.”

Food is being provided by local restaurants, and hoisted up to Vernon via a wicker basket. He bathes two times a week in a small basin, and all the waste he generates goes into a septic tank under the pole, connected to his barrel through a long drainage system.

“I have broken my own record now,” Vernon Kruger recently told Sky News. “Twenty-two years ago I broke the British record of 54 days. I took it to 67 days. This time I’m going to try push it to about 80.”